Established in 1999, our home-grown company has produced organic, non-pasteurized, long-fermented miso and miso-damari (tamari from miso) since June 2000. It is the only company in Canada, east of Toronto, to offer such an extensive line of miso products.

Our mission is to produce living organic products that will maintain or improve your health and reduce the incidence of problems linked to food intolerance.

We produce uniquely natural products – functional foods, nutraceutics, prebiotics and probiotics. Our products are high in nutrients, rich in enzymes and in lactobacillus.

Our products have a rich organic value content. They are living foods with a high level of enzyme activity that enhances food intake and digestion.

Our mission, with a focus on health and continued innovation, is rightly led by the values it endorses, by the knowledge and innovative spirit of its owners, and by the needs of the population.

We are deeply convinced that good health comes from healthy living habits and that healthy eating makes all the difference. We live by the wise words expressed by Hippocrates, more than 2000 years ago: “Let food be your medicine and medicine be your food”.

This fall at the Natural Foods Expo in Washington, D.C., I was pleasantly surprised when a friendly man, Gilbert Boulay, stopped by our booth and offered me a sample of broth from his thermos. It was a simple and delicious miso broth (see recipe at right) using miso, which he and his wife made themselves in Quebec. I knew right away: these people are off to a great start with miso making. I invited him to sit down in our booth and tell me his miso story. An amazing story it is! 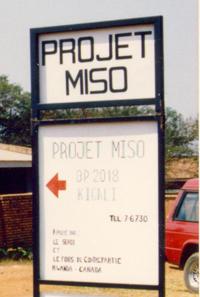 It begins in central Africa, in Rwanda, in the 1980’s. Gilbert is an advisor to the Rwandan Ministry of Agriculture and Forestry. His wife, Suzanne Dionne, with a background in food science and agronomy, is working in nutrition centers introducing health-promoting food products. She also counsels various women’s groups, helping them to start up small food processing businesses. Rwanda is one of the most densely populated regions of Africa. The traditional diet includes cassava, a kidney-type red bean, foxtail millet, sweet potatoes, yams, and some dairy products. In the 1970’s, with concern that the nutritional needs of the growing population were not being adequately met, the soybean was introduced to supplant native foods and to increase soil fertility. But no one had considered how to use the soybean for food. As our story continues, Suzanne and Gilbert reach the conviction that if Rwandans are to rely upon the soybean as a main agricultural crop, they must learn about miso. Suzanne makes a quick trip to study miso making with Yoshi and Lulu Yoshihara in British Columbia. She returns to Rwanda ready to introduce miso, making her first batch at home in the capital, Kigali.

Now, how to introduce this new food to the people of Rwanda? Destiny often lends a helping hand when we commit ourselves to an ideal for the common good. Gilbert has a friend in the government who suffers from high levels of cholesterol. When Suzanne introduces him to miso he feels his condition improve. It so happens that this government official is also a speechwriter for the president of Rwanda. One night, Gilbert and Suzanne listen to the president’s annual address to the nation on their radio. In the speech, the president urges the people of Rwanda to open their minds and hearts to new and unfamiliar foods that can bring improved health to their nation. He actually names miso in his speech! [Can you imagine, the president of the United States in his State of the Union address proclaiming the wonderful benefits of natural, organic foods including miso?!!] 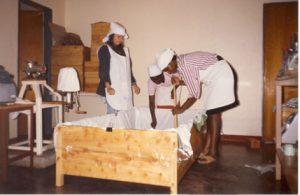 Back to our story: soon after the Rwandan president’s speech, Suzanne manages to gather the means to rent a house and turn it into a miso workshop and neighborhood restaurant. She soon has 22 people on her staff making miso and other natural foods. Several women come to work with her for a month devising recipes to integrate miso into traditional Rwandan dishes.

The news about Suzanne and her work begins to spread. One day a Belgian doctor from the hospital in Kigali arrives at her restaurant with a five-year-old girl and her mother. The girl has the frail body of a three-year-old. For several years she has been unable to hold down her food longer than twenty minutes. The doctor thinks that she may have a serious lack of digestive enzymes, and he wonders if miso, as a last resort, might help.

With no guarantees, Suzanne gives the child a clear miso broth, and returns to the conversation with the doctor and mother. After half an hour the girl has not thrown up! She asks for more broth! The mother weeps. For some days, the child continues to eat the miso broth. She even begins licking miso from the spoon, her body apparently craving the probiotic enzymes and microorganisms present in it. After two weeks, her mother calls to say with delight that her daughter is asking for regular foods, that she is able to hold them down and digest them. 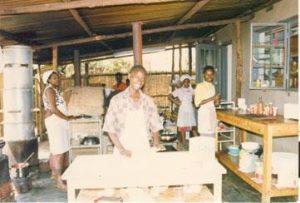 This and other similar experiences were a major turning point for Suzanne, as she realized more fully the healing potential of miso. In 1992, she returned to Canada to study business management with the goal of establishing an organic food–processing business based on her own research and development of natural and organic products.

After receiving her MBA, Suzanne and Gilbert, launched their business, Les Aliments Massawippi, in the lake region of North Hatley, Quebec. (“Massawippi” is an Algonquin name, meaning “deep water”.)

They made their first batch of commercial miso in 2001 for local distribution. In June 2001, Suzanne received the Prix entrepreneurship féminin at the Concours Québécois en Entrepreneurship for creating two new health food products. She published the French edition of her book about miso in December 2001, which to date has sold 4000 copies. The English translation was published in July 2002.

Suzanne and Gilbert believe that unpasteurized miso is one of the single most beneficial foods for health on the planet, and that a daily dose can go along way in preventing sickness and disease. Bravo! And Thank You! — Chistian Elwell. 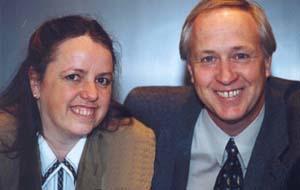 Suzanne Dionne is a Food Technologist (Université Laval, 1982), specialized in the transformation and preservation of food products. The sixth child in a family of fourteen, Suzanne, like her sisters and brothers, started at an early age to contribute to the family finances notably by being included in the seasonal wild berry picking from the time she could walk.

Following five years of research work at the Université Laval health and nutrition centre, Suzanne spent a few years in Central Africa where she worked in nutrition centres and introduced techniques for the production of health products (soy milk, weening foods, cereals for babies).As a counselor for various women’s groups, she helped establish small food production companies (bakery, tofu, breakfast cereal, etc), and in 1990, set up a miso production program.

Back in Quebec, Suzanne and her companion settled in the Eastern Townships with the idea of launching a food transformation company focused on the research and development of natural and organic food products.

In October 1999, after completing a masters in business administration, Suzanne’s project became reality. Les Aliments Massawippi Inc. opened its doors in January 2000 with the production of miso and a with small research lab for work on other health promoting products. Maintaining and improving health have always been strong motivating factors for Suzanne in her approach to food production and preparation.

Gilbert Boulay is a graduate in forestry engineering (Université Laval, 1982). He acquired a solid background in management while working as the director and co-director of a number of forest planning and development projects, in forest resource management and in land management both in Quebec and abroad. He acquired practical experience in communications and journalism producing socio-economic profiles within the framework of sector studies and leading a socio-economic analysis project. He is Vice-President of Marketing at Les Aliments Massawippi Inc. He has also mastered the art and techniques for producing miso.